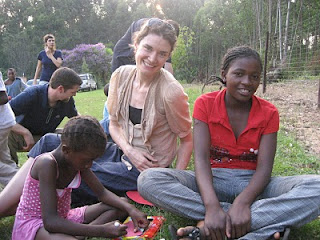 Once I caught up on sleep, I finally sat down to write about the magnificent, activating, atmosphere-shifting trip to South Africa. That was last week. This is the umpteenth attempted format: sound bites. And since point of view has been on my mind as I consider a hefty revision of my long-dormant novel, think of the following in first-person plural. With 22 travelling companions, we managed an incredible unity. So, in one voice, here’s what we have to tell:

“She can see!” Eyes healed at a tent crusade, Hammanskraal Township outside of Pretoria

“She wants you to pray for her. She wants to know this Jesus.” A four-year old girl’s mother who translated for her daughter

“Lookout! He has a water gun!”
“No, that’s a Holy-water gun.”
“Get ready for baptism!” Water fight with Oasis Church members

“Hey! Who wants to speak only in tongues for an hour. Set your watches.” On the bus en route to Nelspruit

“Hey! Get off the roof. The canvas is ripping.”
“Yeah, that’s not in the budget.” Safari truck, Kruger National Park

“Look! Lions!”
And then: “Look! Lions . . . mating?”
“I think it’s a sign: our trip shall be fruitful.”
[After returning home] “Yeah, Facebook deleted those photos.” Kruger National Park

“You know how long this day was? This is the same day we went on safari.” After finishing a prayer tunnel at the end of a 15-hour day

“I like this word-of-knowledge thing.” When a word was called out for anyone with wrist pain, an athlete with wrist injuries was healed; he dropped and did 20 push-ups in front of the congregation

“That’s Pastor Surprise. He speaks a dozen languages that he received through divine impartation.” “Hmm. I’d like to learn Arabic that way. Cantonese, too.” New Covenant Church, Nelspruit

“Now that’s something to write on a postcard: ‘I just was just anointed by a man who’d been raised from the dead.’” New Covenant Church, Nelspruit

“Cappuccino! My clean socks for a cappuccino.” Most anytime

“So outreach went well. We went to KFC, and prayed for a guy with a limp. His leg was healed, and he started jumping up and down. The assistant manager and all the employees behind the counter came running over and asked us to pray for them. They wanted to know a God who heals.” KFC, Nelspruit

“We don’t have pit stops, we have healing-and-salvation stops.” After losing track of how many gas station attendants were saved/healed/delivered during our bus ride breaks

“I sat down next to a woman and started praying for her. When I asked if there was anything else I could do, she replied, ‘When you started praying, I had to read your lips. I was deaf. But now I can hear.” AIDS hospice, outskirts of East London

That’s just a taste, but it’s a sweet one. This adventure was beyond anything I could have planned or expected. And that’s just the way I’m starting to like it.

My sincerest gratitude to all of you who supported this trip with prayer and finances, anonymous and known. Blessings!

This was great Anna. I had already forgotten some of the things that had happened. Thanks for writing it down.

Your blog testimonies released faith into my heart. Loved it - thanks, Anna.

So good! All this stirs up something inside me. I loved reading these God truths.