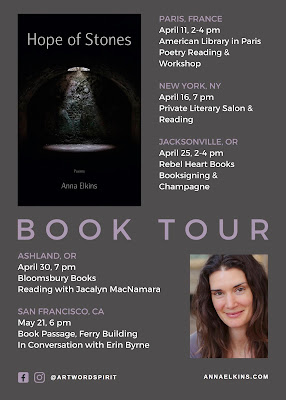 Paris, New York, San Francisco...and Southern Oregon! A dream lineup for a poetry book tour, and I’m so grateful for the friends in each place who helped make this happen.

Hope of Stones is ready to greet the world, and you can pre-order it via my wonderful publisher, Press 53.

I’m going to let the dear poets who wrote praise for the book speak for me on this blog. Continued gratitude to them for the beautiful words!

Anna Elkins’ Hope of Stones is a magnificent (I do not use the word lightly) collection—a beautiful, moving, and thought-provoking book of poems. The writing is striking in its control of tone and its precision, unfolding layer after layer of resonance and implication. Three characters: the nun, the architect, the poet who triangulates the relationship. Three different times in history, three different significant endeavors: the architect’s Paris below ground that reflects and supports the Paris above; the visionary nun’s passionate immersion in the inner mansions of God’s Castle; the poet’s engagement in the sensuous spirituality of her research. Give this book to everyone you love. No book of poems I’ve read in a long time more deserves serious, joyful attention and a wide readership.
—Jim Peterson, author of Speech Minus Applause

This gorgeous book of contemplative poems refuses to accept an easy division between work and prayer. Here, hope is not a thing with feathers. Hope is a paradox, a thing with both heft and light. It is weightless with history, ruin, and body. It is heavy with abyss, nothingness, and caves. Bone and stone point beyond themselves towards the absence of building things up and the presence of emptying things out. Language is both meaningful and errant or even wayward: “earth / is an anagram for heart.” A nun prays “none” against “none.” A whole is reminiscent of a hole. This is a poet’s clearing, housed in eventual collapse. The one who works and the one who prays cross paths, eventually, head to head, skull to skull, in the undertaking of the poet, who excavates a kind of fast, and a kind of pilgrimage, as a way of seeking the first lost garden fruit--the castle cathedral, the ever-never-catacombs--unpicked, undisturbed, and undreamed.
—Gina Franco, author of The Accidental

In Hope of Stones, Anna Elkins creates a multi-various and many-voiced world—set both in the present and in two different pasts, and narrated by three different characters—the Nun, the Architect, and the Poet. This fantastic book reminds me of A. Van Jordan’s M-A-C-N-O-L-I-A, another hybrid collection that brings strong individual poems together into a cohesive narrative. Whereas Jordan’s mode is often cinematic, Elkins works as a portrait painter. Through osmosis, the scholar-poet becomesthe architect and the nun, allowing this intertwined history to work also as an extended metaphor on creativity and desire: “One stair at a time / one corridor after another & a final glimpse / up a shaft to see the pinhole light of sky shining / though a manhole cover….”
—Sebastian Matthews, author of Beginner’s Guide to a Head-on Collision

Hope of Stones is an elegant collection. Its formally accomplished poems, distinct voices, and visual design invite us to see the page as a temporal-geographical region. The architect, Charles-Axel Guillaumot, speaks from the lower left margin where he focuses on materiality, catacombs and the undergirding of Paris as he tries to save the city from collapse; the nun, Teresa of Avila, speaks from the upper right margin, where she shares her architectural vision of the spirit. And the poet, who is either in Oregon or traveling, occupies the center of the page where she brings her own dailiness—fires in summer, plums ripening—into conversations with these historic figures. The poet descends literally beneath Paris in her quest for the architect and ascends into the ethereal and sometimes levitational world of the nun. Like Dante, Elkins takes us on a journey. Hope of Stones traverses countries, continents, and historical periods until finally time and space collapse into a kaleidoscope of spirit.
—Tami Haaland, author of What Does Not Return

Posted by Anna Elkins at 9:01 AM No comments: