Over many cups of tea, in front of many fires, and on the brink of many nights' sleep, I enjoyed reading George Eliot's Middlemarch this winter. Here are a few, dog-eared treasures I couldn't resist sharing before shelving the book:

“To have in general but little feeling, seems to be the only security against feeling too much on any particular occasion.” (58)

“He was conscious of being irritated by ridiculously small causes, which were half of his own creation.” (179)

“It is of no use to try and take care of all the world; that is being taken care of when you feel delight—in art or in anything else.” (204)

“The wit of a family is usually best received among strangers.” (307)

“She was blind, you see, to many things obvious to others—likely to tread in the wrong places . . . . yet her blindness to whatever did not lie in her own pure purpose carried her safely by the side precipices where vision would have been perilous with fear.” (347)

“’By desiring what is perfectly good, even when we don’t quite know what is and cannot do what we would, we are part of the divine power against evil—widening the skirts of light and making the struggle with darkness narrower.’” (365)

“Will not a tiny speck very close to our vision blot out the glory of the world, and leave only a margin by which we see the blot?” (390)

“What we call despair is often only the painful eagerness of unfed hope.” (465)

“Unwonted circumstances my make us all rather unlike ourselves: there are conditions under which the most majestic person is obliged to sneeze.” (584)

“’Of course men know best about everything, except what women know better.’” (689)

“Only those who know the supremacy of the intellectual life—the life which was a seed of ennobling thought and purpose with it—can understand the grief of one who falls from that serene activity into the absorbing soul-wasting struggle with worldly annoyances.” (689)

“We are on a perilous margin when we begin to look passively at our future selves, and see our own figures led with dull consent into insipid misdoing and shabby achievement.” (731-2)

“For the growing good of the world is partly dependent on unhistoric acts; and that things are not so ill with you and me as they might have been, is half owing to the number who lived faithfully a hidden life, and rest in unvisited tombs.” (781)

{All passages from George Eliot's Middlemarch. Reprinted by Wordsworth Classics, 1994}

The While of Thaw 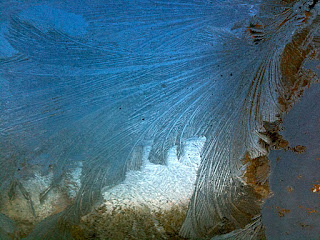 until the cold dark

for ice to trace.

When day breaks, I climb

inside the car and sit,

looking through a crystal matrix

that repatterns sky and trees.

I wait for night’s world to thaw

with this odd bird of ice

both of us frozen in flight

waiting for the sun

into a moveable stillness.