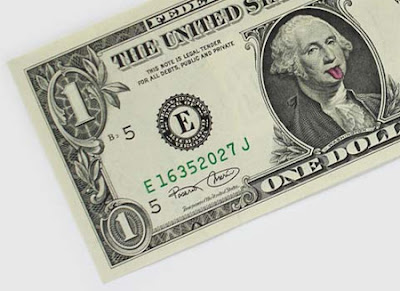 The poet filed her taxes for the previous year—a year she dedicated to her art. She realized that she technically lives at her country’s poverty level. To her continued wonderment, she finds ways to see many other countries without debt. (She would like to add that she has no trust fund, offshore accounts, or supporting spouse—though she has nothing against any of those!)

She starts to wonder: do the little digits on pieces of paper or computer screens really mean anything?

2) “Money is like a sixth sense—and you can’t make use of the other five without it.” —William Somerset Maugham

And then she sees a pair of boots she’d REALLY love. That aren’t on sale. That would chip away at her dedication pay her annual IRA contribution. And she realizes that yes: those little numbers mean something.

3) “Money will buy you a fine dog, but only love can make it wag its tail” —Richard Friedman

Like a good egalitarian, the poet has dated both rich and poor men over the years. Their financial status had little to do with the end of those relationships—but she did notice that the ones who respected their finances respected themselves—and her.

4) “Budget: a mathematical confirmation of your suspicions.” —A.A. Latimer

The poet used to have a little budget sheet. Back in high school. But since she has spent most of her adult life either self-employed or with erratic income, she long ago moved from budgets to savoir-faire. This works. Except when it almost doesn’t (see #2).

5) “All I ask is the chance to prove that money can’t make me happy.” —Spike Milligan.

Go ahead and try her!

6) “Money is the opposite of the weather. Nobody talks about it, but everybody does something about it.” —Rebecca Johnson

The poet, who once gave up financial insecurity for Lent, observes:

She has been the girl with the salaried job and the vacations to far-flung lands.

She has been the girl living in an unplumbed cabin after the economic downturn, learning how to fill a bag of groceries for just $20.

She discovered something in those contrasts: she wrote more poetry in the cabin than she did with the salary, and she remembers those poems with far more fondness than direct deposit paychecks. (Though she’d truly be game for the opportunity of #5.)

7). “There is the natural economy, and there is the Spirit economy. Though I have no idea how it works, I know it does work.”—Anna Elkins

The poet has come to believe that the Spirit economy transcends the money-for-time model, numbers with lots of zeros, and all the dog-eared financial planning books on her bookshelf.

Maybe most importantly, she has learned to be grateful for a life that inexplicably works—partly because she doesn’t put her faith in her own ability to earn it (though she can and does work hard) but instead is thankful for both the visible reality and the invisible. And she has a hunch that the realm beyond the “possible” has a far stronger currency!