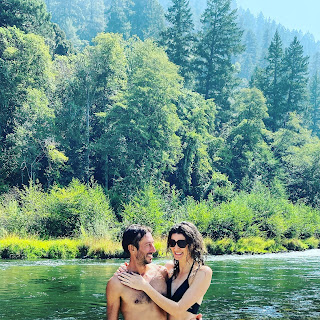 I’m a metaphorical girl—I see connections everywhere. This year, I learned the word apophenia: the tendency to look for connections among unrelated things. I’m pretty sure I have a not-so-mild case of it. Whether through simile or metaphor, I am constantly comparing unlike things to better understand abstractions.

In fact, here’s a metaphor: our marriage is a fascinating case of apophenia!

Which brings me to rivers. I spend A LOT of time on rivers since I married a man who loves them. And this spring, I’ve wondered about that metaphorical comparison of “peace like a river” in Scripture (Isaiah 48:18, 66:12).  Spend time on even a single river, and you realize that rivers are varied: once section might be placid as a pond. The next might be a white-water “boulder garden” your husband inexplicably wants to kayak through.

Like all of it. Like: peace in all the river sections, from frog water to Class V rapids.

And peace in the snags—the fallen trees and root masses that accumulate along a shore. They can impede progress. But they can also create little eddies of stillness out of the fast current and give you a place to pause before you continue your journey. I kid you not, I had that snag realization by a river one morning, and that same afternoon, Jared and I got into a massive snag-fight. We got caught on the jagged edges of stuff we’d let accumulate along our shore, but once we pressed through, we found a pool of peace. Someday, we may even remember that there can be peace in the snags, too.

I have an old hymn stuck on repeat in my heart: “When Peace, Like a River.” That song has always held power for me. It was originally titled, “It Is Well With My Soul” for its famous refrain: “It is well, it is well, with my soul.” But I didn’t learn why it was so powerful until last fall, when our friend came for dinner and played us the song on his guitar, telling the back story.

Horatio G. Spafford wrote the hymn in the nineteenth century. He was a prosperous businessman in Chicago. He and his wife had a son and four daughters. Things were going well—until they weren’t. They lost their son to scarlet fever. Then, the Great Chicago Fire destroyed all of Horatio’s real estate, wiping out his life savings. He decided to take his family to England to try and start over. Right before he planned to leave, a business deal arose that could help his family, so he decided to send his wife ahead of him with their daughters.

The boat carrying his family shipwrecked. His wife survived, but all of their daughters died. As soon as he received the news, Horatio took the next ship to be with his wife. At one point on the voyage, the captain told him they had reached the spot where his children had drown. And there—in the place of deep loss and sorrow—he wrote a hymn of peace. Here are the first lines:

Whatever my lot, Thou hast taught me to know

That man’s understanding of grace takes my breath away. It makes me game to learn the currents of peace like a river.