The Gasket of Grace 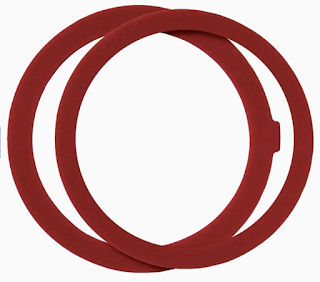 To celebrate this month that celebrates relationships, I decided to write about gaskets.

I don’t think I really knew what a gasket was until we had three needing to be replaced. First to go was my husband’s kayak drysuit neck gasket (which I really didn’t know about). Second was our woodstove door gasket (which I learned how to replace). And third was my little stove-top coffee maker gasket (which apparently gives up if I accidentally leave the contraption on the burner too long).

Once things happen in threes, I start to pay attention. And I start to research meaning. Turns out, the official definition of a gasket is a seal that fills the space between two or more mating surfaces.

Well, if that isn’t a relationship metaphor!

A favorite of the hundred or so books I’ve read on marriage (I exaggerate that number, but only slightly) is Rob Bell’s Zimzum of Love. In it, he explores the ancient Hebrew word zimzum, which essentially means “the space between.” I’m kind of obsessed with this idea. In fact, my first poetry collection many years ago was a little chapbook titled, The Space Between. I look for connections everywhere—for what brings things and people together and what keeps them together.

“So,” I asked myself, “What is the gasket of marriage?”

First, I should explain that my husband and I are very different. We are learning to laugh about this.

He’s Mr. Spontaneity. On a Friday after a long work week, he can grab a jar of peanut butter and head out camping on a whim. I am Mrs. Planner. If we are going camping, I like to A) know about it at least a day in advance and B) pack a cooler brimming with pesto, sliced aged cheddar, pre-chopped onions soaking in olive oil for morning eggs, driving snacks of sea-salt dark chocolate, at least one good bottle of wine, etc. etc.

He’s Mr. DIY. Whether changing the car oil, installing a new dishwasher, or cutting his hair, he’s a do-it-yourself kinda guy. I’m Mrs. Outsource-My-Weaknesses. I like to take the car in for its checkup to my trusty mechanic, hire a handyman to install anything that comes with a lengthy instruction manual and connects to electricity or water, and when I did briefly cut my own hair for a season, it just confirmed that I should leave some things to the professionals.

He’s Mr. Down-to-Earth and says it like it is. I’m Mrs. Pie-in-the-Sky and tend to quote literature aloud. When we watched Starsky & Hutch one night, I recognized the start of a favorite Shakespeare line, quoted by Snoop Dog, “To err is human…” and I spoke in time with the rest of it: “…to forgive, divine.” At dinner parties now, my husband likes to say I quote Snoop Dog, at which point, I start distinguishing between primary and secondary sources.

Whether expressed by a 17th-century bard or a 21st-century bard, forgiveness is something my husband and I both agree on. It’s the gasket of grace. Especially in marriage. And especially when two different people approach life in different ways—which is bound to lead to misunderstandings.

I have a hunch that you don’t need a lot of grace to love someone who’s a lot like yourself. That’s pretty easy. Learning to love difference is a gift in that it does require a lot of grace. Maybe the more difference between two people, the more grace you can have—if you also choose to give it.

I looked up zimzum to make sure I didn’t miss anything. Part of HarperCollins’s definition states: “In marriage, zimzum is the dynamic energy field between two partners.”

We are learning to celebrate the dynamics.